Here at Southampton we have a system of elected course representatives who are there to ensure you get the most you can out of those 40 (or however many you chose to do!) degree hours a week. While second- and third-year course reps are elected at the end of the academic year, first-year and postgraduate course rep elections take place within weeks of Freshers coming to Southampton – so be prepared! 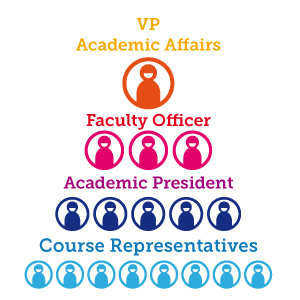 In addition to the course reps, there’s also an Academic President for each subject who co-ordinates the reps’ efforts and liaises more directly with staff. At a higher level there are Faculty Officers, who oversee the work of the Academic Presidents within their Faculty of the University; and finally, presiding over the whole business, is one of the elected Sabbatical Officers of the Students’ Union, the Vice-President Education. (Image courtesy of SUSU, update pending.)

We, EngSoc, have created this page as a handy look-up so you all know your course reps from your Faculty Officers, and are aware of the support that’s there should you ever need help with an aspect of your degree. Of course, our Welfare Officer, Megan Andrews, is always there for concerns of either a pastoral or academic nature. So without further preamble, here’s the lot of them:

First Year Single Honours: to be elected in October 2015.

First Year Combined Honours: to be elected in October 2015.

Second Year Single Honours:  to be elected in October 2015.

Second Year Combined Honours:  to be elected in October 2015.

The Faculty of Humanities also has a page on student representation which lists Course Reps in every Humanities discipline – particularly useful for Combined Honours students! There are also the Education pages within the ‘Making a Difference’ area of SUSU.org – well worth a look into if you’re keen to learn more.

Welcome to the virtual home for EngSoc, the University of Southampton English Society!

We're making use of this site as a central hub for all things EngSoc for members, prospective students, and alumni alike!

This site has all the details of our socials, sports, welfare activities, and everything else we're up to! Check back for regular updates and we'll see you soon!